Josh Tovar will join me and share how the use of social media (Facebook/Instagram/Twitter/Periscope/Snapchat), allowed for the school’s report card to increase from a D- to B- in three years and earning state distinctions. The graduation rate increased by 8% and it could be seen that the campus Familia culture had increased as reflected by the last climate survey where 80 out of 88 items increased to include 100% of items by students and parents.

Until Next Time, Stay Techie My Friends. 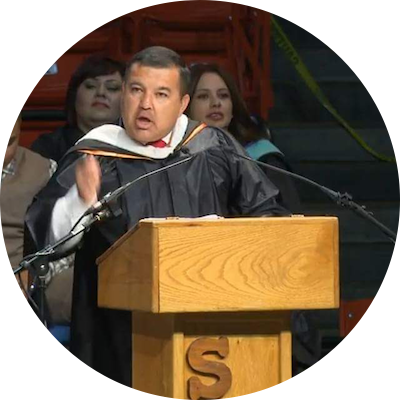 Josh Tovar is the proud son of Virginia and Jesus Tovar. Josh and Berenice are the proud parents to Matthew, Aaron and Josh II aka Cashew. Josh was born in Cd. Juarez, Mexico and immigrated with his family in the late 70’s to El Paso, Texas. After trouble years in high school, he joined the US Marines Corps as a 0811 artillery man. Proudly joining the Marines, it allowed him to serve his country and attend UTEP. Where he earned his degree in History and Minor in Education. As a public educator, he has been a member of 13 schools at the elementary, middle, high school level all the way to teaching Master level courses at a University. He has a Masters in School Counseling and Administration from Sul Ross State University. He also has a Masters in History from UTEP and he finished his Superintendent course work at Sul Ross. He was a middle school and high school teacher for 8 years, Assistant Principal for 13, worked in Operations for 2 years, and now he’s on his 6th year as Principal at Memorial Pathway Academy in Garland ISD, Texas. He was honored by his colleagues at Parkland Middle School by being selected as Teacher of the Year and made it to the Top 10 in the district. As an Assistant Principal he began to use social media to promote his student and the positive thing they did at school. He was entrusted to head the Medical Magnet at Bel Air High School where he worked with this colleagues and the use social media to increase recruitment by 30% the two years he was the administrator in charge. While principal at Socorro High School, he used social media to help support his colleagues in the classroom and his students. As Principal Socorro HS, “The Familia” and the use of social media (Facebook/Instagram/Twitter/Periscope/Snapchat), allowed for school’s report card increased from a D- to B- in three years and earning state distinctions. The graduation rate increased by 8% and it could be seen that the campus Familia culture had increased as reflected by the last climate survey where 80 out of 88 items increased to include 100% of items by students and parents. Josh understands the power of Social Media and how our customers are deeply connected to these platforms. He understands that we need to meet our students where they are at and connect with them, as Ryan Scott says, “connections before content.”